Sliders first gained notoriety in the 1920’s when White Castle opened with “Slyders” as their signature item. Although those sliders were made with a square beef patty, onion, and pickle in a bun, sliders now come in many variations.

In the recipe below, Shaad shares his variant , combining his love of White Castle with his pitmaster skills to create a smoked chicken slider. At our competition, Judge Hanif Mo’ Islam (owner of Gyro Shop) remarked “The meat was well seasoned, and the smokey flavor was fantastic! The cilantro and the roasted pepper went very well with the bread.”

As part of our ongoing series interviewing the competitors, below are Shaad’s answers and his recipe.

What type of grill/smoker do you have? We have a Big Green Egg XL (pictured here) and a DCS five burner gas grill that came with our house. I use the Egg to smoke but use the gas grill for everything else, from steaks to peaches, just because it is so fast and patience is not on my short list of virtues!

Though I’ve been though a number of digital thermometers, and, more recently, two digi-Qs and a Cyber-Q, by far the best one I’ve ever had is a FlameBoss 200 (pictured just to the right of the Egg). It basically transforms the Egg into an oven, ventilating and retarding the flame to achieve the desired temperature. The coolest thing about it is that is transmits all of the data to the cloud, where you and anyone else you want can watch the grill and food temperature online (below).

The fan in the foreground of the picture is to blow smoke away from me during the cook, in order to keep me from smelling like I’ve been waiting in line at Pecan Lodge for three hours. I’d welcome any suggestions on how you guys deal with this problem during your cooks. 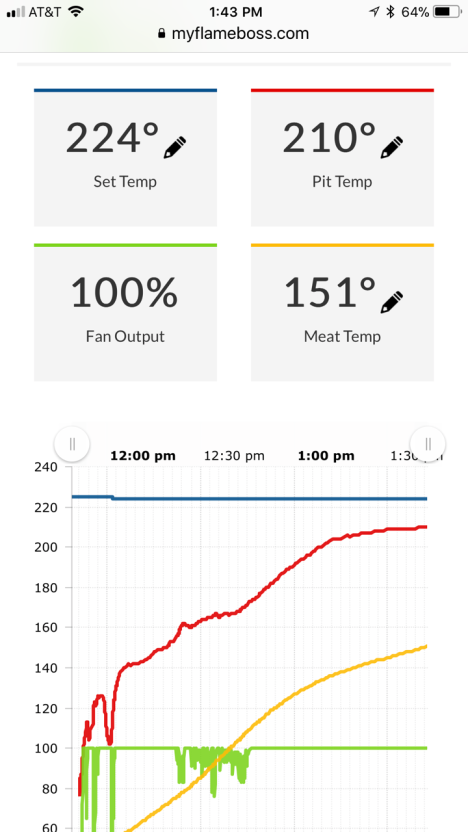 What grills/smokers have you had in the past? I started out with a Foreman XL with a bun warmer on the top and it sucked. After that, I had a small two burner propane grill during residency. Once we moved to Dallas we got a bigger four burner, and now the five burner I use now. I did once get a Traeger pellet grill but had a difficult time keeping the meat moist so I got rid of it.

What is your favorite grill/smoker you’ve ever had and why? To do most things, I use our gas grill because it’s fast. For smoking, the Green Egg is hands down the best. Food always turns out moist and flavorful. The down side to using it is the time and work that goes into it and the cleanup factor. The upside is amazing restaurant quality food.

At what age did you start grilling/smoking meat? I started grilling in residency but never thought about smoking meat until I first tried true Texas barbecue I think at, of all places, Sonny Bryan’s. It was so different, and after that I truly understood what Texans mean when they said that Texas barbecue doesn’t need sauce. It is amazing what passes for barbecue in other parts of the country.

After that, I tried wood chips in a drawer that came with my grill, on my grill in a smoke box, and even sprinkled near the food, but nothing really came close until I smoked my first brisket on the Green Egg.

What do you enjoy the most about grilling/smoking? The science, the showmanship, the taste, the smell, and the way it brings people together. There is nothing like carving a brisket or a turkey in your kitchen, with friends and family gathered all around waiting to taste the first sizzling piece. That just doesn’t happen with biryani or chicken tikka masala.

What’s your signature dish? I wish I was creative enough to have one! A few of my favorite things to make are:

Give us one tip/hack to make improve our grilling/BBQ skills. The one thing I’m terrible with: patience. I’ve told myself this over and over again, so now I’ll tell you: you just wait till the desired temperature is attained.

After talking with so many pitmasters, including several of you, I am convinced that that is the difference between good barbecue and some of the garbage I’ve fed my family!

My recipe was very simple really. My goal was to have the smoke speak for itself and to have very little in the way. Here it is:

View all posts by Zahid Ahmad